Globally, obesity is a threatening factor imposed over every niche of the population, ranging from physical deformities, physiological degradation to even, mortality.

It is high time for you to know, where you are heading to, how healthy this journey is and how healthy can you make it ahead, to achieve your fitter and healthier version.

According to WHO, obesity is defined as “abnormal or excessive fat accumulation that may impair health”. It is basically measured using BMI(Body Mass Index)– which is the ratio of weight in kgs by the square of the height in meters. The BMI value as per the standards is given in Table 1.

present under the skin. Its presence is considered crucial and not harmful to the body.

present around the visceral organs, which, if in excess, is harmful as obstructs organ’s function.

It is the fat mainly accumulating around the major vital organs like the liver, kidneys, and pancreas. Besides bringing up many health concerns including diabetes and cancer, visceral fat is very hard to lose too.

Reasons for the Occurrence of Obesity

Various factors can be the reason for the development or the manifestation of obesity.

Family history influences fat distribution and accumulation in the body.

One of the major factors nowadays, that is disrupting the hormonal balance as well as the eating pattern.

The disturbance in the physiological state as well the medication has been prescribed can impact the body’s homeostasis, which can eventually cause obesity.

This is a major cause of obesity in the current scenario, attributing to increased urbanization, providing easy access to convenient, processed and packaged foods. This, when accompanied by a sedentary lifestyle, is the main reason for the increased prevalence of obesity.

Do you want to know your BMI, BMR etc? 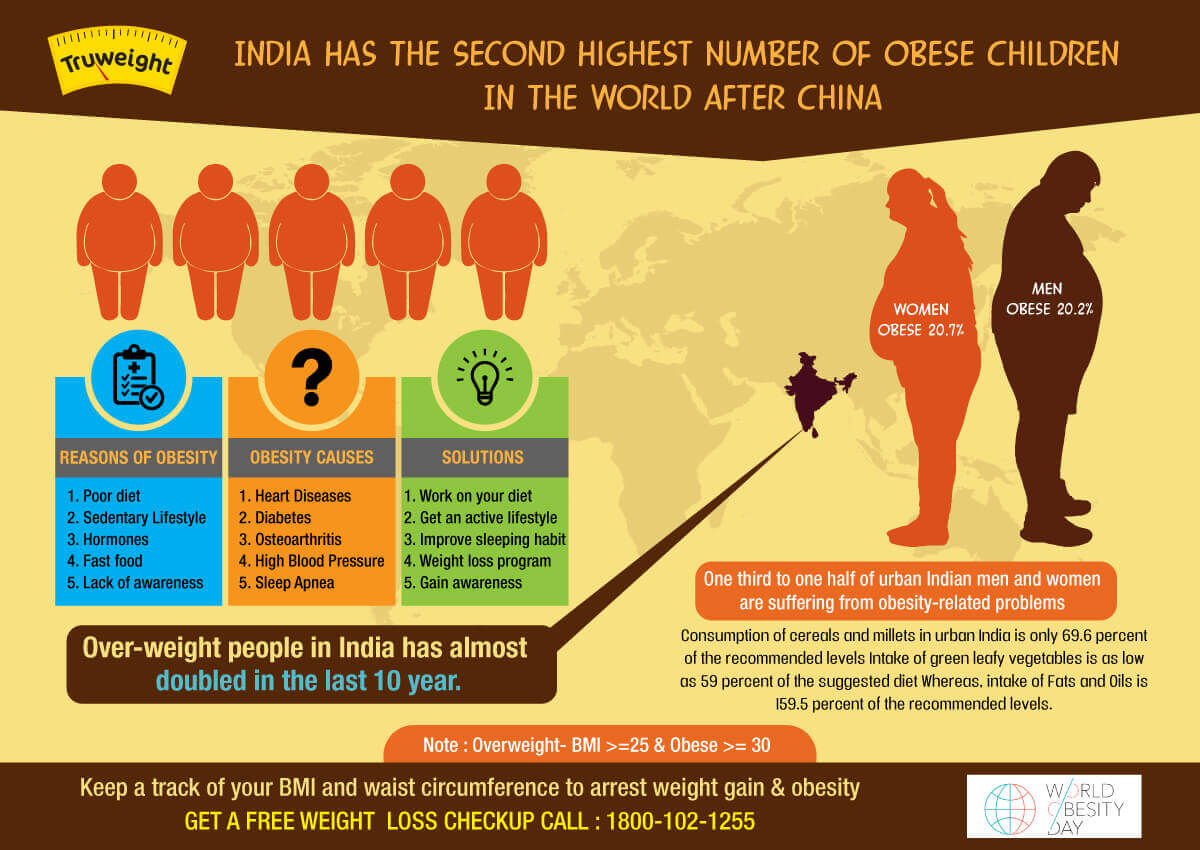 Obesity is not just a disorder but a cobweb of many associated disorders as well. If not checked at the right time, it can prove to be hazardous to health.

A. Obesity and Diabetes

Diabetes is the chronic condition of elevated blood sugar levels. According to the Global Report on Diabetes, WHO, the number of diabetics has increased from 108 million in 1980 to 422 million in 2014, i.e more than doubled since 1980 globally.

India represents 49% of the world’s diabetes burden with 72 million cases in 2017. With the increased prevalence of obesity, the epidemic of diabetes mellitus has also risen over the past 20 years.

The science behind this is the increased fat level in the body that forms a coating around visceral organs that disables the insulin receptors on cells, to respond to insulin hormone and therefore, encourage fat accumulation.

Also, with the increased load of nutrients, cell organelles (specifically endoplasmic reticulum) signal the cell surface to not to respond to the insulin hormone. This creates the condition of Insulin resistance which ultimately can cause elevated blood sugar levels.

If remain unchecked, it can lead to severe complications linked with eyes, diabetic foot, kidney failure, and even blindness.

B. Obesity and Hypertension

Hypertension is the term for high blood pressure and is the force exerted by blood against the walls of blood vessels.

According to WHO, 7.5 million deaths worldwide, was caused by elevated blood pressure. While in India, according to ICMR, 10.8 percent of all deaths are attributed to hypertension.

The risk factors for the same may include

The association between obesity and hypertension is all the game of excess body fat that accumulates in blood vessels, forming plaque. This, in turn, leads to hindrance in blood flow and therefore, increased blood pressure against the walls.

CVD or Cardiovascular disease is a class of diseases that involves heart or blood vessels and includes heart failure, attack, stroke, etc.

The relation between obesity and CVD is multifaceted. Atherosclerosis is the main reason due to fat deposition and plaque formation. This condition causes- increased load on the heart and an insufficient supply of oxygen to the heart, resulting in left ventricular hypertrophy, enlargement, and arrhythmia (irregular heart rhythm).

We often hear obese people complaining about back pain and body ache. It should be taken seriously as if remain unchecked, can lead to physical and physiological impairment.

According to WHO, 9.6 percent of men and 18 percent of women aged over 60 years suffered from arthritis out of which, 80 percent have restricted movement. India, as well, has a total prevalence rate of 22- 39 percent.

With increased weight, there is increased stress on joints and bones-leading to friction, inflammation, and malalignment.

The mechanism of how obesity can affect joint health is associated with leptin hormone. With an increased number of fat cells or adipocytes (in case of obesity), the level of leptin hormone increases which is found to be degenerative against cartilage, inducing inflammation.

Also, obesity aggravates the condition of gout due to the impaired function of the Kidney, leading to the accumulation of uric acid.

As per the survey by WHO, cancer is one of the major causes of death globally with an estimated 9.6 million deaths in 2018. As per the reports, its basic 5 reasons are-

According to the National Institute of Cancer Prevention and Research, India, around 2.5 million people are suffering from cancer with over 7 lakhs of new registrations per year.

The underlying mechanism to explain this is the increased level of insulin that stimulates cell division and tumor growth. Cancer of kidney, breast, colorectal, esophageal, prostate and gallbladder is linked with increased weight.

A few steps, every time, can make a lot of difference, enabling you to lead a healthy and disease-free life ahead.

1. Have a balanced meal

Include all the food groups in your meals

2. Indulge in a physical activity

Try to avoid sitting for long and make sure to bring some kind of physical exercise, like brisk walking, running, indoor exercise or gym session, into your routine. 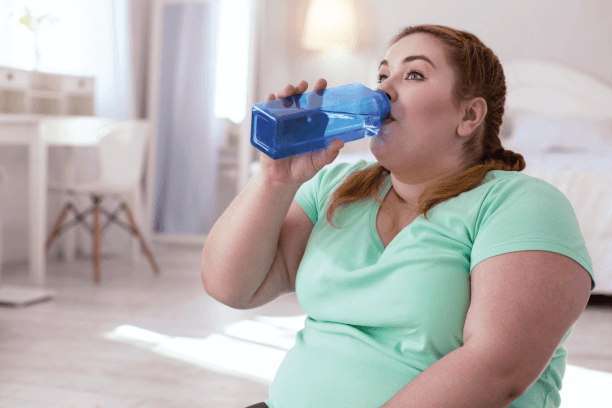 Avoid foods that are rich in simple sugars, fried and baked. Also, prefer home-cooked food over processed or packaged food.

Quality sleep for 7-8 hours is essential for keeping the hormone balance intact as well as smooth metabolism. Also, it helps in reducing stress along with the lethargy-free start of the next day.

Management of obesity is not a time-taking or money-investing task, it is all about discipline, proper knowledge, and guidance, that you can make a difference.

Talk to our expert Possible Nutritionist for more information and guidance. The first consultation is on us. Click here to avail.

2 thoughts on “5 Reasons Why Obesity is a Silent Killer! Pledge Fitness This World Obesity Day!”