How much sugar do you think is present in human blood? The Answer is having human blood has only 5 gms of sugar. That’s just 1 teaspoon. To put some numbers in perspective, a mango has 44 grams of sugar, an apple around 20 gms.

Even the healthy rotis have around 30 gms of carb in 2 rotis, which converts into glucose.

Type II diabetes is a dietary disease. And it is easy to pass the blame to genes and not take any action. 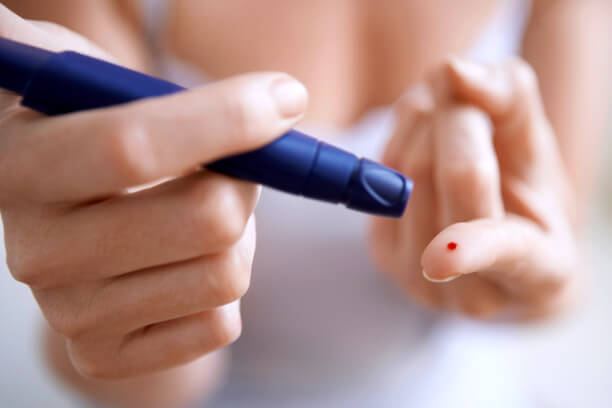 Ask yourself, is diabetes not irreversible? Nothing can be farther from the truth. We have seen thousands of diabetic patients reverse their diseases. Question, is diabetes caused by too much sugar in the blood? False.

For example, let’s assume you have a headache due to acidity. Clearly, acidity is the root cause and needs to be treated. But if your doctor ignores it and just gives you disprin to manage your headache, will it solve the problem? It won’t.

You will need headache medicine all your life. And if that medicine increases your acidity, then even dosage will have to go up. And you might be told that your disease is a chronic and a progressive disease. Same thing happens in diabetes.

The root cause of the problem is insulin resistance and if you don’t solve it, then the disease keeps on getting worse. Higher sugar in your blood is only a symptom and treating it does not make diabetes better.

And that’s why you would hear that diabetes is a chronic and progressive disease. It can only get worse and never get better. Absolutely wrong.

Here are some Shocking Numbers of Diabetes

7 crore Indians suffer from the problem of diabetes. Another 10 crores are estimated to be suffering from pre-diabetes. This number is quite alarming.

Humans have a history of thousands of years on Earth but till 100 years back, diabetes was not a common disease. Over the last 30-40 years, this preventable disease has spread like wildfire.

Our forefathers did not eat so much processed food and they ate a lot of nutrient dense food. But now-a-days we end up having a lot of empty calories.

Diabetes May be Slowly Killing You, Here are the Facts!

Diabetes is not a problem which can be ignored. You cannot just be taking medications and be happy that things are under control. Things are not. Let’s look at some startling facts on how diabetes increases the risk of life-threatening diseases. A single-minded focus on medications to manage diabetes is not the right approach, as that does not attack the root cause. As a result, more and more problems keep on cropping up.

Diabetes is the  most expensive disease in the world. It feeds all other diseases in the body. From heart failures to kidney failures. When a diabetic person dies of a heart attack, we say, “So and so died of heart attack. But nobody says he died of diabetes.” Whereas the real reason may have been diabetes.

It is estimated that an American would spend Rs 1 crore on medicines if he is diagnosed with diabetes at the age of 40. Costs in India are lower, but an average diabetic here would easily spend Rs 15-20 lakhs on diabetes medicines in his lifetime. Are you ok with this unnecessary expenditure?

Diabetes also reduces the lifespan on an average by 10 years, and makes you lead a sub-optimal life. Taking an injection daily is not a pleasurable experience for anyone. Nor going for dialysis. It’s a serious disease, though most people take it lightly. Because sugar levels come under the normal range with medicines.

Sugar level is just the symptom and not the root cause. If you don’t take care of the root cause, you will be doing a great injustice to your life. Type 2 diabetes treatment include diet, healthy food, exercise, medication and insulin therapy.

Diabetes is a deadly and expensive disease. Diseases like heart failure and kidney disease which stem from diabetes are often not recognised in patients. It greatly reduces one’s lifespan. Targeting the root cause of diabetes rather than the symptoms is the ideal way to beat the lifestyle disease.