Chenopodium quinoa, popularly known as Quinoa, is a super grain that has taken the world of the health-conscious by storm.

Quinoa is a gluten-free seed that contains all the 9 essential amino acids and has twice the amount of fiber as compared to the other grains.

Quinoa was and is still revered for its rich in nutritional content – good amount in proteins with an extraordinary balance of essential amino acids. It is believed that Quinoa was consumed as a traditional food.

It is rich in high amounts of biologically active compounds known as phytochemicals such as saponins, phytosterols and phytoecdysteroids.

Intake of quinoa has considerable beneficial effects on our metabolic, cardiovascular, and gastrointestinal systems. Quinoa is a multifunctional grain and both its leaves and seeds are edible.[1]

The multi-functional grain Quinoa is one of the world’s most popular foods known for its health benefits. 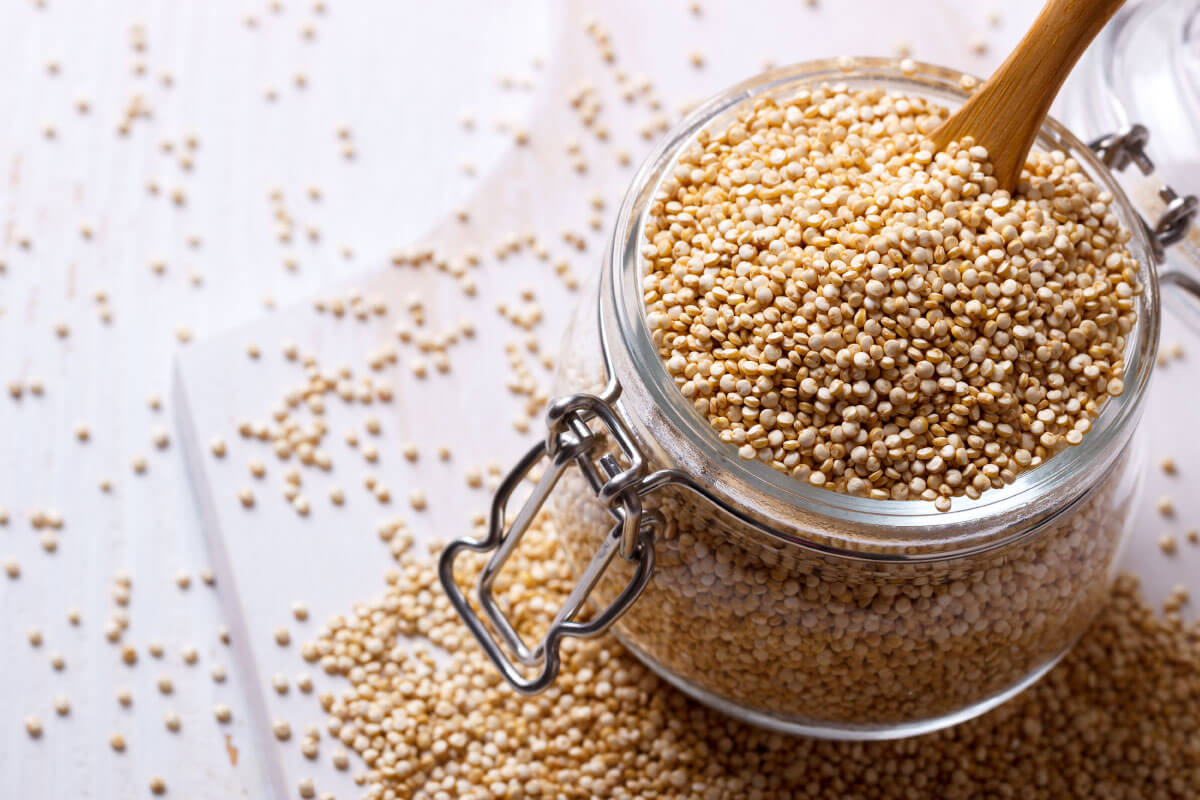 It contains all the 9 essential amino acids, vitamins, minerals, proteins and lipids. The fibre content in quinoa is much higher than most of the other grains. Quinoa is also rich in iron, potassium and magnesium.

It also contains a rich and wide variety of antioxidants and phytohormones.[2]

Nutritional properties of quinoa and its functions

Grains are an essential part of our diet and almost half of our energy requirements are met by the intake of these staples. As per a survey conducted by the USFDA in 2015, it has been observed that the nutritional values of quinoa are much superior, as compared to other grains such as wheat, barley, rice or oats.

About 83% of the carbohydrates found in quinoa are in the form of starch. The rest of it consists of fibre. It also contains about 4% of sugars in the form of maltose, galactose, and ribose.

An article published in the Journal of the Science of Food and Agriculture, 2009, states that the “unusual composition and exceptional balance” of protein, oil and fat, as well as minerals, fatty acids, antioxidants and vitamins, make quinoa an exceptionally nutritious food.

Quinoa with all the essential amino acids provides eight grams of quality protein per cup (185 grams). It is an excellent source of complete plant-based protein for vegetarians and vegans.[3]

Quinoa contains high concentrations of folic acid and vitamin B6. According to a USFDA survey conducted in 2015, quinoa is rich in micronutrients and minerals. For instance, 100 grams of quinoa intake can meet 80% of a child’s vitamin B2 requirements and similarly 40% of adults’ requirements.

It is also an excellent source of vitamin E. In fact, it is much higher in this grain than those found in wheat.

Quinoa seeds contain high amounts of minerals and its calcium and iron content is much higher as compared to the other staple grains known to humans.

As compared to wheat (0.16%) and corn (0.14%), quinoa contains 0.26% of magnesium and potassium. These are present in adequate biological forms and can thus be consumed to meet the mineral requirements of a balanced diet.[5]

Quinoa has low levels of sodium and is abundantly rich in fibre. Fibre is the indigestible part of carbohydrates that provides satiety and ease in bowel movement in the system constipation.

Quinoa works wonders by maintaining the cholesterol levels in check and thus can prevent cardiovascular diseases. It can also help in maintaining blood sugar levels. 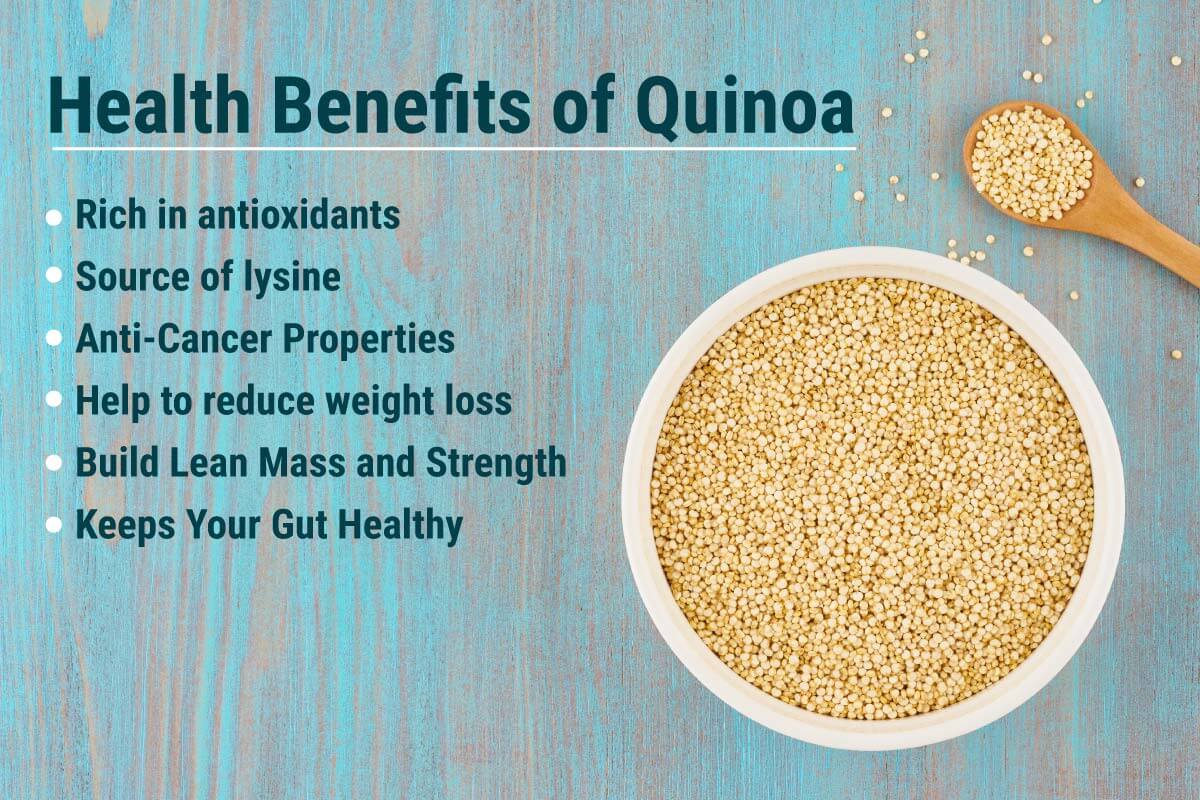 Consumption of whole grains, in general, reduces the risk of type 2 diabetes.[6]

1. Quinoa a rich source of antioxidants

Quinoa is a rich source of antioxidants as it contains an abundance of phytochemicals.

Lysine is an essential amino acid that is crucial for the growth and maintenance of the body. It plays a crucial role in building muscle protein and calcium absorption.

Quinoa contains high amounts of the amino acid lysine, which is usually not present in legumes.[9]

Quinoa has formidable anti-cancer and anti-inflammatory properties. It contains bioactive compounds in the form of saponins and polyphenols.

Compounds such as genistein, quercetin and kaempferol are known to suppress and prevent the growth of blood vessels that feed cancerous tumours.[10]

Touted as the super grain of the future, intake of quinoa aids in the process of weight loss. Quinoa does not directly cause weight loss but makes the process a lot easier.

Quinoa is rich in proteins , fibers which activates leptin hormone and prevents hunger, fiber in it enables slow release of glucose to blood stream and thus satiety will be found. Hence frequent food intake will be limited . Hence Quinoa has its role in weight loss. Fibre rich products also reduce cholesterol level and prevent hyperlipidemia.

It contains high amounts of complete proteins and fibre which suppress the hunger pangs and keeps you satiated for a longer period of time.

Moreover, a high intake of fibre helps in lowering your cholesterol levels.

According to a clinical trial conducted and published in 2014, it was observed that quinoa reduces fat absorption and helps in expending more energy. To put it simply, it helps in burning more calories and enhances the glucose metabolism of the body. It helps your body to process the carbohydrates more effectively.[11][12]

Quinoa rich in manganese has its role in improving body functioning, metabolism in the system. Body for enhanced metabolism functioning. and also prevents abdominal obesity.  And quinoa contains higher amounts of manganese as compared to wheat and rice. The amount of manganese in quinoa helps us meet almost a third of our daily requirements of the mineral, which in turn can help prevent abdominal obesity.[13]

Quinoa is increasingly becoming popular with the gym-goers and athletes for its wonder composition – protein.

A diet rich in protein helps in building and preserving muscles which increase strength and enhances physical performance.

Quinoa based products are advisable to individuals  who prefer maintaining ideal body weight, especially athletes, who wish to gain muscle mass, build lean body mass and reduce fat mass in the system which is necessary for more physical output/performance.

Quinoa also has its major role in maintaining gut health. It possesses more amounts of prebiotics that are utilized by beneficial bacteria in the gut, which are very much necessary to improve digestion, help in weight management.

In the journal Genes(2018), it is reported that prebiotics, probiotics, synbiotics(combination of probiotics and prebiotics) are necessary to maintain gut health and thus promote weight loss in obese population.

The human gut contains trillions of bacteria that affect your appetite, body weight, digestion, mood, and hormone production. These microorganisms present in the gut have a direct impact on your ability to lose fat and keep it off.

In 2018, a study published in the journal Genes researchers has found that prebiotics, probiotics, and symbiotics are required and can alter the gut flora positively thus facilitating the weight loss mechanism.

Being a multifunctional grain, quinoa contains large amounts of prebiotics that feeds the good bacteria in the gut. All these compounds combined help in balancing the microbiota that aids in digestion.

Effective digestion helps in the prevention of obesity by regulating the appetite and thus reducing the weight.[15]

Quinoa has a potential lipid-lowering effect. In 2017 according to a study published in Current Developments in Nutrition, consuming 50 gms of quinoa daily can help reduce serum triglyceride levels in people suffering from obesity or overweight.

Consumption of quinoa also helps in reducing the prevalence of metabolic syndrome.[16]

Study reported in Current Developments in Nutrition (2017), showed that consumption of quino based products helps in maintaining lipid parameters, in obese patients, it reduces elevated triglycerides in blood serum and thus helps  in weight loss.

Introducing Quinoa in Your Daily Diet

With its power-packed nutrients, quinoa is a humble grain that can be incorporated effortlessly in our diets.

Quinoa can be cooked very easily and it has a very neutral taste with a nutty flavour.

Quinoa can be used as a breakfast smoothie which will be protein rich breakfast. It can be a alternate for oats or pasta which possess gluten and slows weight loss. It takes less cooking time for quinoa so it is a convenience product.

Here are some of the ways to cook quinoa.

Smoothies are a great way to begin your day. They can be prepared quickly and are considered a healthy breakfast. One can blend the quinoa in any of your breakfast smoothies and give it a protein twist. This will keep you energised throughout the day.

2. As a Substitute for Oats and Pastas

Quinoa can be easily substituted for oats or pasta. The grain boils and becomes tender quite quickly. A dash of vegetables, nuts, fruits or milk can be incorporated to enjoy the goodness of it.

Its high fibre content keeps you satiated for longer hours and at the same time, keeps you energised.

Quinoa along with wheat flour, chia seeds, and honey can formulate an energy rich nutritious bar which will be a healthy snack too.

Combined with nuts, whole wheat flour, chia seeds, chocolate chips and honey, quinoa can be transformed into energy bars that can be consumed on the way or packed for snack boxes.

It can also be incorporated to soups, for its functional and nutritional property.

Quinoa can be easily added to soups for its thick creamy texture and enhanced nutritive value. A comforting chicken or vegetable soup can be enhanced by adding quinoa.

The super grain is a complete source of protein and can make a great addition to any healthy salad. The combination of fibre, protein and healthy fats can transform a simple salad s into a power-packed entrée.

Side effects of quinoa

Some people sensitive to quinoa have to avoid it which can be recognized by symptoms like stomach aches, itchy skin on its consumption. This is due to compound saponin present in the outer layer of the grain.

This compound saponin contains toxins which are irritable to some individuals. Washing quinoa thoroughly before use can prevent this allergic condition

Though intake of Quinoa has garnered a lot of popularity, in some cases eating quinoa may cause common symptoms of food allergies or stomachaches, itchy skin or hives. Sensitivity to the compound saponin, found in the outer covering may cause these symptoms.

Saponin is a bitter outer covering which is soapy in texture. It protects the quinoa plant from fungal and insect attacks. Saponin contains toxins that can cause irritation in some people. Though the level of toxicity is low, some people may be sensitive to this compound. 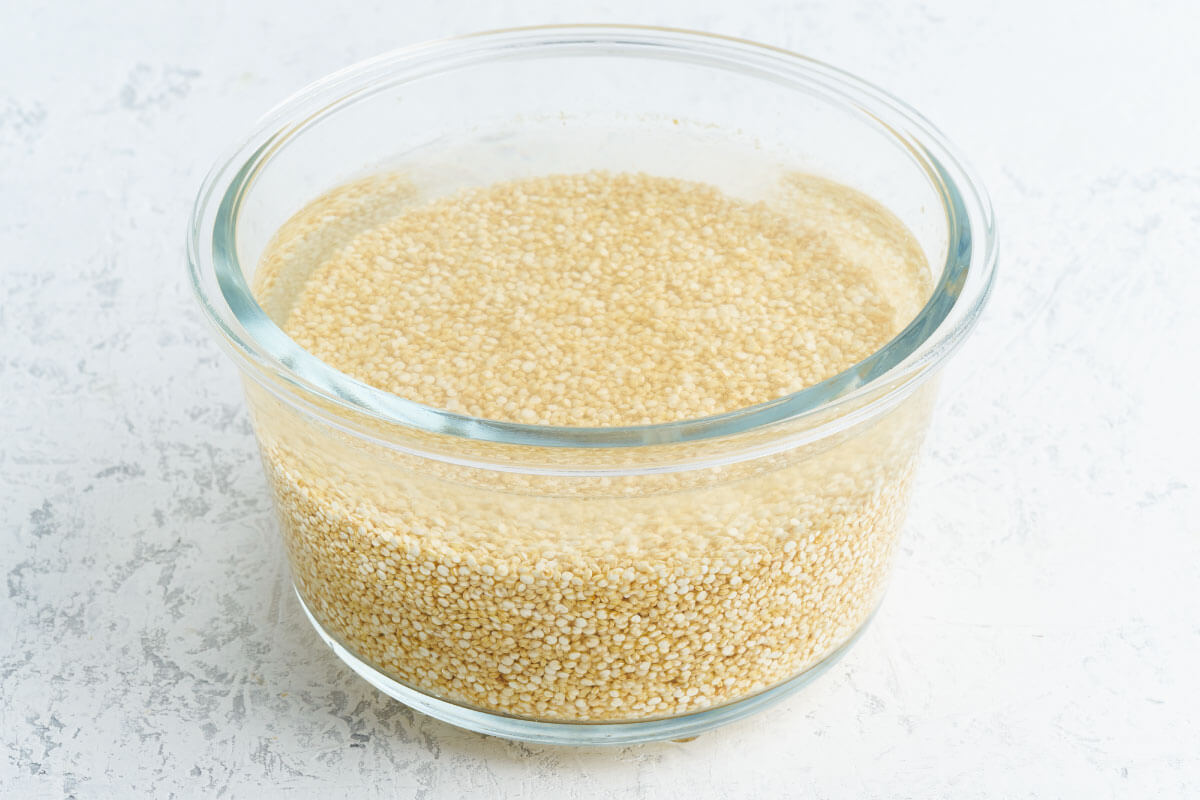 Saponin allergy can be addressed by thoroughly washing the quinoa seeds under running water. Soak quinoa for 30 minutes and wash it well before cooking. This will remove the natural coating that contains the saponin.

Symptoms of intolerance to quinoa include:

As with any allergy, extreme symptoms in case of a severe allergic response to having quinoa can include:

Quinoa is the traditional grain which was used for many years. It is known for its high protein content, dietary fibre which helps in providing nourishment to the body.

It is helpful in weight loss as quinoa based products improves satiety, helps in increasing muscle mass, and reduce fat mass in the body.

It may be allergic to some people because of saponins in it which can be reduced by washing grain thoroughly before processing, cooking. It can be consumed as soups, smoothies, snacks, and dinner.  Overall quinoa is a nutritious grain, suitable for weight loss programmes.

Quinoa has been cultivated for ages and is consumed mainly for its edible seeds. It has been growing and cultivated in the Andes for the last 5,000 years. Various subspecies of the plant are highly adaptable and thrive in a variety of altitudes and climatic regions.

The UN General Assembly declared the year 2013 as the “International Year of Quinoa”.[18]

The Year of Quinoa tried to create awareness and grab the world’s attention towards the nutritional, economic, environmental and cultural value of quinoa.

Quinoa can be consumed to enhance your plate. It can be swapped for rice during dinner and oatmeal during breakfast. From salads to soups, all of your meals can benefit from a high-quality quinoa protein boost.

6 thoughts on “Know all about quinoa, your superfood for total wellness”