Medically reviewed by Shanmukha Priya, M.Phil and Ph.D. in Food Science and Nutrition

If it wasn’t painful enough already, weight gain during periods or weight gain before periods is another additional curveball that women need to deal with.

While raking up water weight is one reason, there could be several other causes for the scale to be tipping to the right.

And while this unwanted and irritating period-related side-effect can be both alleviated and prevented, read on to know why it happens and how exactly to mitigate this anomaly.

Causes of weight gain during periods

Elevated levels of the female hormones like progesterone and estrogen lead to alterations in the body’s sodium levels, leading to water/fluid retention, which is one of the major reasons for weight gain during periods.

What’s more, even bowel movement changes can also lead to water retention. One way to avoid this is by avoiding salty foods in the second half of the menstrual cycle.

PMS, which happens 1-2 weeks before the actual period, could thus result in one putting on weight by the time the period actually begins. PMS could also cause anxiety and depression, which could also lead to increased food intake and weight gain.

Also, if one tends to skip exercises when one is PMSing, then the body begins storing fat and one ends up gaining water weight.

Most women, when PMSing, suffer from gut problems such as bloating during period, indigestion, and constipation.

As a result of the digestive system not functioning properly, the body’s metabolism slows down and the rate of fat storage increases. It also increases stress levels, leading to weight gain from inflammation.

In the PMS and post-PMS stage, one tends to crave food more, thus leading to weight gain. The second half of the menstrual cycle also increases the progesterone levels in the body, which leads to increased appetite and weight gain.

Magnesium levels in the body could drop just before the period, leading to lower insulin levels and increased glucose cravings. Thus, one tends to crave high-sugar foods more and binge eat more, leading to weight gain.

Polycystic Ovarian Syndrome is a reproductive hormone imbalance which leads to metabolism issues and affects as many as 1 in 10 women of child-bearing age.

Those suffering from PCOS are more prone to gain weight during their menstrual cycle. Also, for most women, this weight gain is temporary.

How to deal with weight gain during periods

Hiding the weighing scale also works – after all, the weight gain is temporary, so beating oneself up about it won’t help at all. Maintaining a PMS journal in order to keep track of dates and recognize the triggers will also work wonders.

Stocking one’s larder with healthy snacks such as fruits, popcorn, and other low-calorie snacks helps you keep off salty and high-sugar foods when the cravings kick in.

Staying off caffeine also helps since a caffeine kick causes crankiness and anxiety in an already stressful situation.

Staying hydrated keeps one’s metabolism active and flushes out the toxins from the body, thus preventing weight gain during periods.

It may seem counter-intuitive, but beginning your mornings with a teaspoon of lime juice and a glass of warm water will do wonders.

Skipping meals isn’t the answer to weight gain during periods.

One must keep up the steady consumption of 5-6 meals throughout the day which keeps one satiated, balances the hormones and keeps the metabolism from stalling.

Exercise is not only an appetite suppressant but also helps with cramping and period bloating, keeps stress at bay, allows one to sleep well and keeps one away from unhealthy food.

Unless and until you absolutely cannot exercise, keep up the exercise routine even during periods to keep the weight at bay.

6] Cutting down on salty food:

Also, remember that the salt isn’t the salt in your food, but rather in the processed and junk foods you tend to binge on. 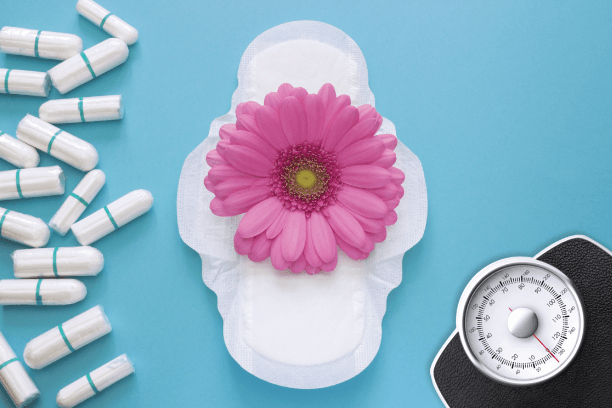 Try consuming supplements such as calcium, magnesium, omega-3, etc. which are helpful in combating PMS symptoms.

Also, try and consume vitamins, which increases progesterone levels and decreases estrogen levels, helping balance the hormones and control weight gain. Tip: Consult a medical professional or your doctor before doing so.

Period weight gain, thus, is not impossible to shed, even if it is unavoidable.

1. How much weight do I gain during my period?

According to studies and observation, one can gain anywhere around 1-2.3 kg before and during the period.

In a majority of the women, the weight gain lasts until the 1st day of their period. However, if one suffers from health issues such as PCOS, then the period weight gain could last even longer and it also becomes more difficult to shed those extra pounds.

3. When does period weight gain go away?

Weight loss begins right when the period begins, with water weight taking about 3-4 days to go away. However, the timeline also depends on one’s food and lifestyle habits – for some, it might take up to a week to lose the extra weight.