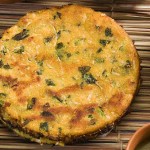 The traditional makkai di roti has got a healthy twist, it married palak to form makkai palak roti. As such corn packs in the antioxidant carotenoids and loads of gut-healthy fibre.

Palak, on its part, brings in not just a colour variance but its disease-fighting property due to the antioxidants and storehouse of vitamins and minerals.